A short history of the food truck, from chuck waggon to gourmet heaven on wheels. 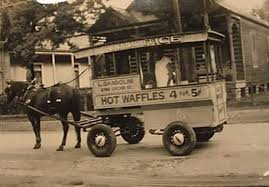 Whether you are a fan of Vietnamese coffee, curry-infused burgers, seafood paella, New York-style hot dogs or bistro food to go, there is a specialist mobile food retailer out there these days that can satisfy your cravings.

Modern day street food is niched, it’s on-trend, and it offers exceptional quality at affordable prices. And whether you are in the mood for a chocolate-dipped deep-fried churro or an entire meal on the run, you can now – with the help of websites, GPS, mobile technology and a plethora of smartphone apps – find them wherever they are. The cool food joints of today are there to be discovered, and when we talk about ‘followings’ for these street vendors, we literally mean followings as some move from pitch to pitch so you have to seek them out – it’s all part of the mystique.

But where did all this begin, and why are food trucks and street food vendors so popular these days?

If you’ve ever watched an old black and white western, you’ll have seen the obligatory chuck waggon covered in pots and pans, rattling its way through the prairies. No doubt you’ll have waited with amusement for the scene with cattlemen huddled around the campfire complaining about having beans again – mostly because it reminded you of the Mel Brooks comedy Blazing Saddles, or maybe that’s just me! It’s believed that the chuck waggon was the first example of a mobile food facility from which cooked food could be dispensed. Of course, there had been centuries of food stalls and carts that serviced markets and battlefields, but it was the chuck waggon, believed to have been inspired by Texas rancher Charles Goodnight in 1866 for his men’s long cattle drives, that is considered the ancestor of today’s fashionable food trucks. What a long way we’ve come in the last 140 years.

Moving on, it was the latter quarter of the nineteenth century that saw the creation and growth in popularity of the diner in America. Modelled on railway dining cars, they were more like mobile restaurants with cooking and seating areas than the rolling field kitchen than chuck waggons had been.

With the twentieth century came advances in technology, equipment and energy – and street vending became commonplace in the US and Europe with mobile food stands tapping

From the late 1930s, and throughout the mid-twentieth century, street food vending went into decline as hygiene standards either plummeted or they’d always been that bad but nobody had noticed until then.

Nothing significant was really heard about food trucks from then until more recent history. But the economic collapse that occurred in 2007 was actually a positive thing for the food industry – well, the mobile side of it anyway. Lots of out of work chefs, some with exceptional talent, advances in smartphones, the development of apps, a rediscovered passion for an eclectic mix of culinary delights by society in general and lower than ever market entry costs, all combined to provide the perfect environment for the rise of the modern day food truck.

Unlike their predecessors, food trucks today conform to strict hygiene standards; they focus on narrow culinary passions, are manned by skilled chefs and provide restaurant quality food at street vendor prices. The lack of major overheads makes food truck ownership accessible for aspiring chefs to create their own followings and communities have grown up around these food trucks that spread word of them far and wide on social media, acting as unpaid marketers and valuable advocates for these businesses.

The modern food truck has become a culinary destination, a social experience and a fashionable way to dine. So what do you fancy for lunch today?